Selections from Australia’s Western Desert, From the collection of Steve Martin and Anne Stringfield 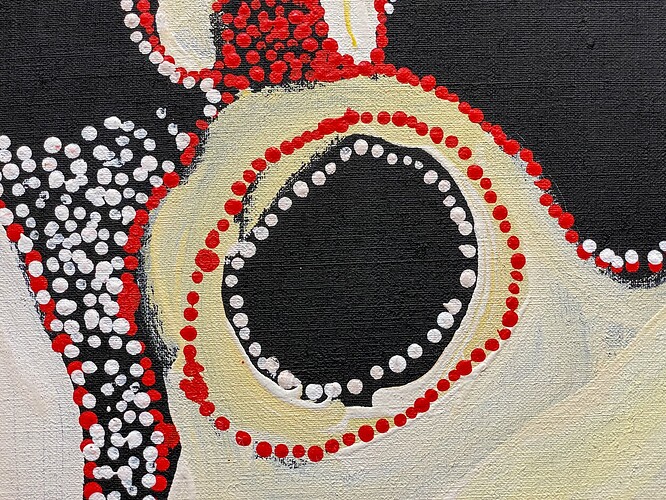 I came by twice after getting a glimpse of this work while seated in the exhibition space for a Creative Mornings event, and feeling them around us.

The exhibition, Selections from Australia’s Western Desert, From the collection of Steve Martin and Anne Stringfield, was on view September 12–October 27, 2022 at The National Arts Club.

The event theme was Ethos, and Patricia Garcia-Gomez, who “cultivated a daily ritual of ocean swims, one that she has since maintained year-round in Long Island, no matter the temperature and conditions”, talked to us about her relationship with water and retreating into the world.

As it turned out (I don’t think it was intentional), like the paintings, her talk and sense of ethos was very much about place and being embodied in it, and how it enters you.

I transcribed the exhibition statement and the gallery cards, as well as included some images of details (close up like that, it feels like I’m receiving something of the experience of being in this living places) both so I could share this with you, and also to help me remember what it felt like to be in this room, where I palpably began to cultivate a more sensitive awareness of placefulness.

The paintings in this exhibition contain both contemporary truths and secrets of the oldest living culture in the world. They represent ancestral stories that function as sacred instructions for caretaking of people and places. The works defy the logic of contemporary art, as their energetic gestures express the voice of the individual artist as well as that of the community.

Aboriginal art, as it is widely known today, stems from the Papunya, in the center of Australia. In 1972 elders began to paint motifs onto walls, boards and canvases that were previously only applied to rocks, bodies, and sand during rituals. These motifs tell stories of events and places, and were a form of intergenerational knowledge sharing.

Over time abstraction stemmed from the artists omitting spiritual symbols from their paintings, to preserve their sacred heritage. Through this intellectual and spiritual conversation, unique, individual styles emerged. Emotional expressiveness became a form of preservation, leading to artists generating new and wild associations. Works in this exhibition include expressive representations of the shimmering brilliance of firelight at night, dancing bodies, dry salt lakes, big sky country, water serpents and monoliths. If you look hard enough, you can observe and read narratives in paintings that allow you to visit a faraway place through someone else’s telling.

and now, the work… 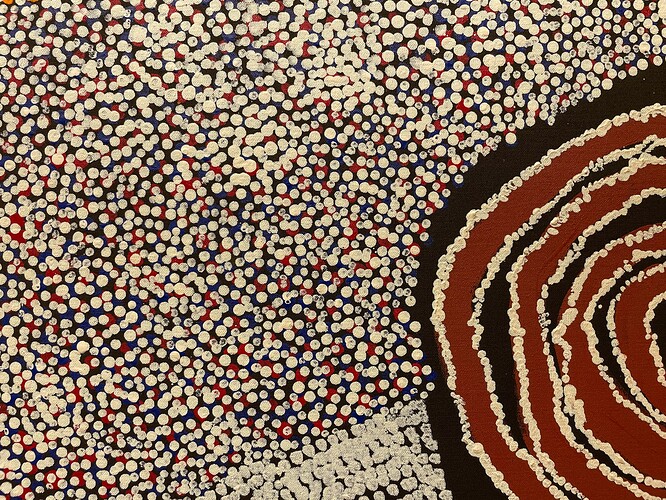 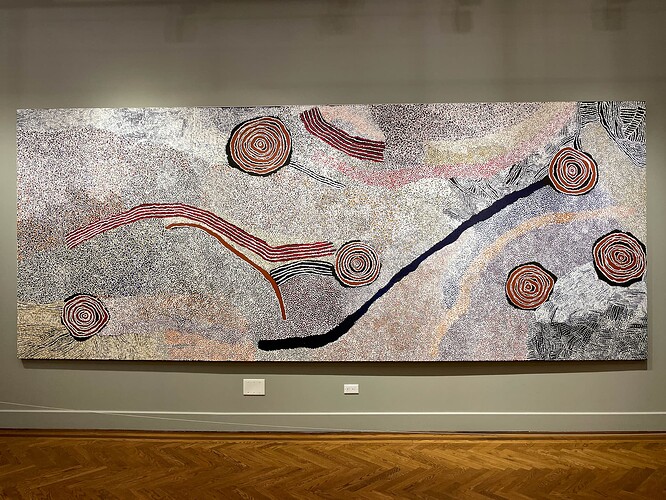 In 2012, a personal reckoning with a gentle form of Alzheimer’s marked a transition in Carlene West’s paintings. Detailed paintings fo the salt lake, in the traditional style of the Western Desert region, gave way to expressive gestural representations of the same subject. Tjitjiti is rendered in white and cream and bordered with red dots on a black background evoking the traces left behind by the natural environment. West began painting in 1997 and her acclaimed works have been acquired by the National Gallery of Australia, the British Museum and the Metropolitan Museum of Art. 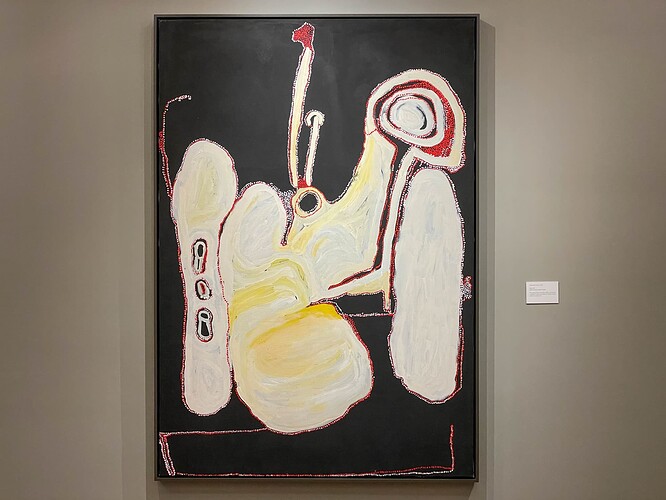 The painting takes its name from Tjitjiti, a salt lake and significant cultural site in Spinifex country where the artist was born. 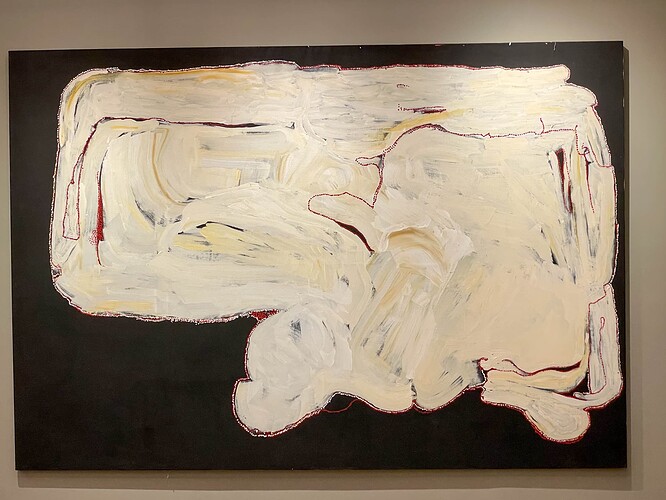 Timo Hogan is from the remote community of Tjuntjuntjara in the Great Victoria Desert. He is one of the youngest painters from and affiliated with the Spinifex lands. Timo’s majestic representations of Lake Baker and its ancient legend of Wanampi (powerful water serpent) resonate with his love of heritage and birthplace. “This is a big place, a big lake. He lives here. Wantersnake man. All this place is white and that watersnake man is white… Always the same place. Lake Baker. That’s because it’s my place. My father’s place.”

Tim Hogan was the recipient of the prestigious Telstra Art Award in 2021. 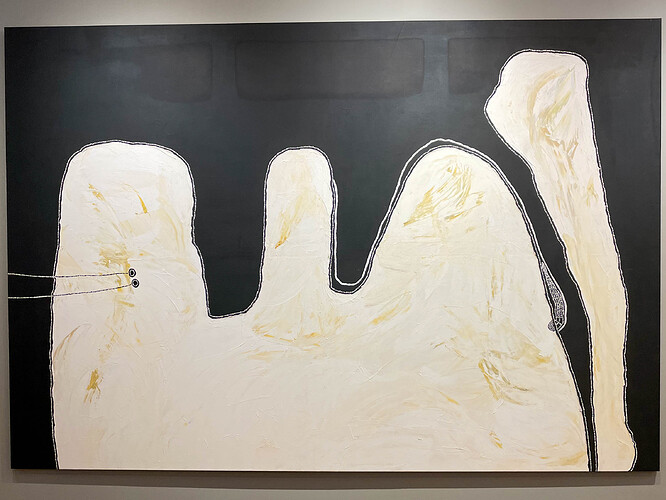 Warlimpirrnga was born into a family of Pintupi hunter-gatherers who had never come into contact with Euro-Australian society until 1984. His abstract images derive from sacred stories and songs of the Tingari, the ancestors of the Pintupi spirit being who are believed to have created all living things. In October, 2016, the artist had his first solo exhibition in the United States at Salon 94 Gallery, NYC. 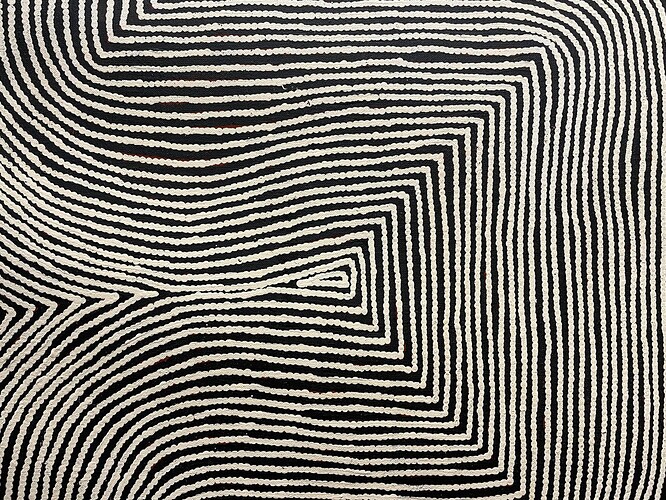 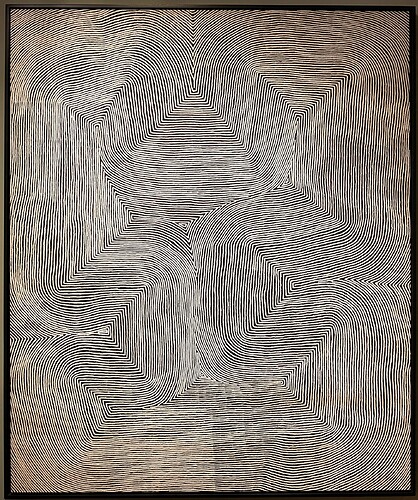 Doreen Reid Nakamara was an important artist and spokesperson for the Papunya Tula artists cooperative owned and operated by the Aboriginal people of the Western Desert of Australia. Her personal style re-figures the Australian landscape depicting designs associated with the Marrapinti rockhole site and is noted for its precision and movement.

Doreen Reid Nakamara was the 2008 recipient of the Telstra Award and her work is in the collection of the Metropolitan Museum of Art. 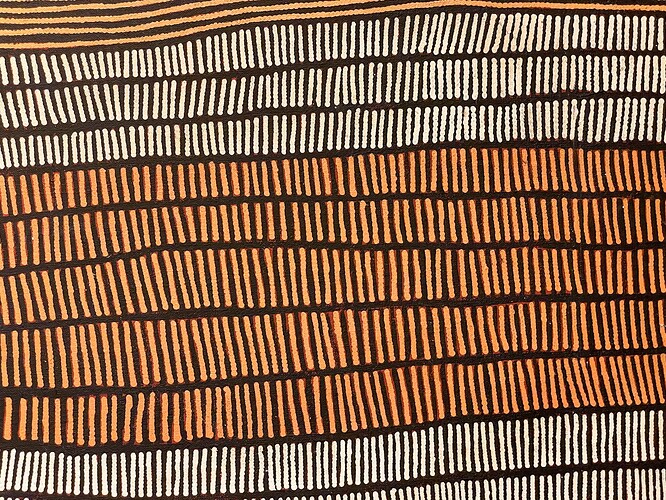 thanks for coming by…

And much gratitude to the The National Arts Club for bringing Selections from Australia’s Western Desert, From the collection of Steve Martin and Anne Stringfield to my hometown.